Heat transfer theory can be examined broadly advanced physics and advanced math applications, by simplifying and can bring many problems, but the mathematical solution by making some assumptions. 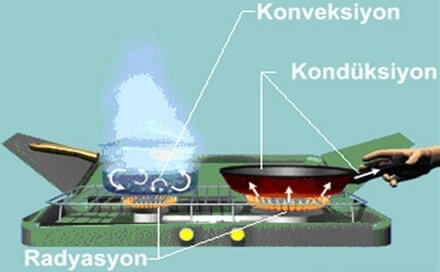 In many parts of heat-exchange event of the cooling process conducted its ability to occur in the cooling system and the cooling area of the heat transfer itself holds its widest point. Cold rooms evaporator and condenser design to isolate heat, cold room maintained at various types of substances in almost every element of the cooling system to heat flow in the compressor housing as heat transfer event occurs. First, the cooled heat transfer medium itself that is exposed to the event that caused it, cooling medium is normally to form a proper flow of cooling medium from the surrounding volume. heat entering the cooling volume, cold room with heat from present or occur in their (refrigerated goods, lighting, motor, people, etc.) and combine with the temperature of the outside air circulation occurring in the door opening and multiply. Evaporator / received by the cooler refrigerant / passed to Refrigerant matter and “cooling load,” he called, and the total heat is transferred to the condenser through compression by the compressor in the vapor compression cycle. The condenser , the total thermal response of the energy expended during the compression process of the compressor and the heat from the evaporator of the refrigeration cycle away.

As shown, the heat transfer system consists of a multi-element repeatedly. In addition, different parts of the refrigerant system liquid and gas form during processing and not to change position “mass transfer” is also faced with the event.

Heat transfer event is in three different ways and they are:

used in the design of the last two road comprehensive cooling equipment. If you leave it until the two substances to each other and one hot the other cold, heat flows from hot to cold material substance.This is called conduction. This works the ball to roll down an inclined surface similar to the force of gravity, as in, for example, is a condition that can be easily understood. If you blow a plate of food in a way that cools the air. A portion of the heat from the food are transported by means of air molecules. This is called convection. If you remove a core part with a kick in the glowing light of a bonfire that slowly lose their core part you will observe that be off. Actually it radiates heat by means of radiation or igneous i.e. loses. does not need to flare the substance to emit heat radiation, it uses the combination of these methods all to come to equilibrium with the surroundings. As can be seen, instead of cooling the material to leave this matter alone with self colder material it will be sufficient to expect from the rest of nature. Despite our fairly close to the actual mechanical properties of the cooling system there are some features that should be disclosed first. Now let’s see them.

States of matter; Article 3 The state has upset everyone knows; solid, liquid and gas. Here is a substance important point for us is the need to give solid to liquid, and then heat it matter to put the gas phase. In the same vein, the liquid material from the gas phase and then heat must also be taken of that agent to the solid phase. Heat is the type of energy and heat transfer might still occur under the 1st and 2nd Law of Thermodynamics. Each also comes in three heat transfer temperature difference, heat flows into the low-temperature side by the high temperature and the amount of heat leaving a resource is equivalent to a temperature rise of her receiving element.

rate of heat transmitted through various materials
– Material thickness
– Cross section
– Temperature difference on both sides of the material
– Material thermal conductivity
– It depends on factors such as the duration of the heat flow.

Convection is the process by energy transport fluid motion. If a liquid or gaseous medium, the temperature in another region of the thermal energy transfer fluid motion will be due to the difference.The most important issue is the transfer of heat convection. fluids in heat exchangers, solids (surfaces) that they are separated by convection, the most important heat transfer mechanism for transporting energy between the fluid and surface. a prime example of the result of convection currents in the air is cooler. Refrigerator cools the air in contact with the cooling coil and so he begins to descend to the bottom of the fridge increased density. In this way, the heat is drawn from the room and draws heat from the wall of the food refrigerator. After cooling, the heat expands the air density begins to decrease and taken the heat rises until it reaches the cooling coils. Convection cycle, air continues as long as the temperature difference between the coil. In market-type unit, the plates can be placed into the cabinet. The purpose of convection currents, is directed to receive the desired air flow patterns around the coil.

Thermal motion of an object forming elementary particles, causing them to emit energy in the electromagnetic ışımaşekl. Increasing the temperature increases the movement of the particles and thus the radiation intensity. Radiant heat is absorbed easily by the dark or opaque objects or substances. However, light-colored surfaces or materials, as rays of light, radiant reflect heat waves. This is why they reflect heat waves. This is why the refrigerator is manufactured in light colors.

Some of the body absorbs the energy of this radiation is done, some of them reflect, and some of them they permitted to pass more freely. Single pass freely through a perfect vacuum. Energy this energy waves when they made coincident absorbent another medium by transferring the medium will increase the thermal motion of the medium. So that heat energy emitted from the system, has now been transferred to the system that generates radiation. one temperature of the system increases the temperature of the other decreased. All objects will emit thermal radiation continuously.

What is Heat ? What is Temperature ?